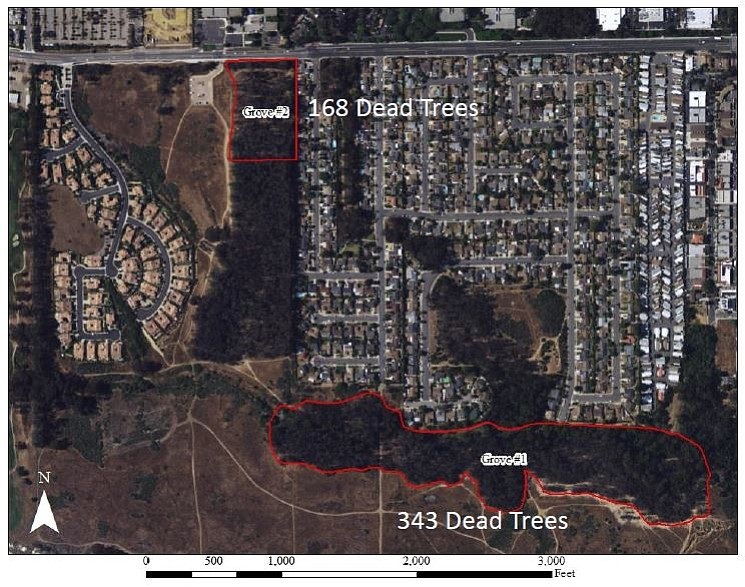 About a tenth of the trees in Goleta's butterfly forests are dead, endangering not only the monarch habitat but also the public who flock to visit them.

The tens of thousands of monarchs that normally flock to Ellwood Grove are this year nearly outnumbered by the dead and dying eucalyptus trees, victims of drought and high temperatures over the past five years. Some of the 65-foot trees slump too closely to the public trails that crisscross Ellwood Mesa and its world-famous butterfly groves. The City of Goleta will soon be closing the area until dead and dying trees have been removed. The tree canopy now is largely open to the sky, causing conditions of too much wind and a loss of humidity and the stable temperatures that support butterflies. The monarch population plummeted to zero in February at Ellwood’s main grove. 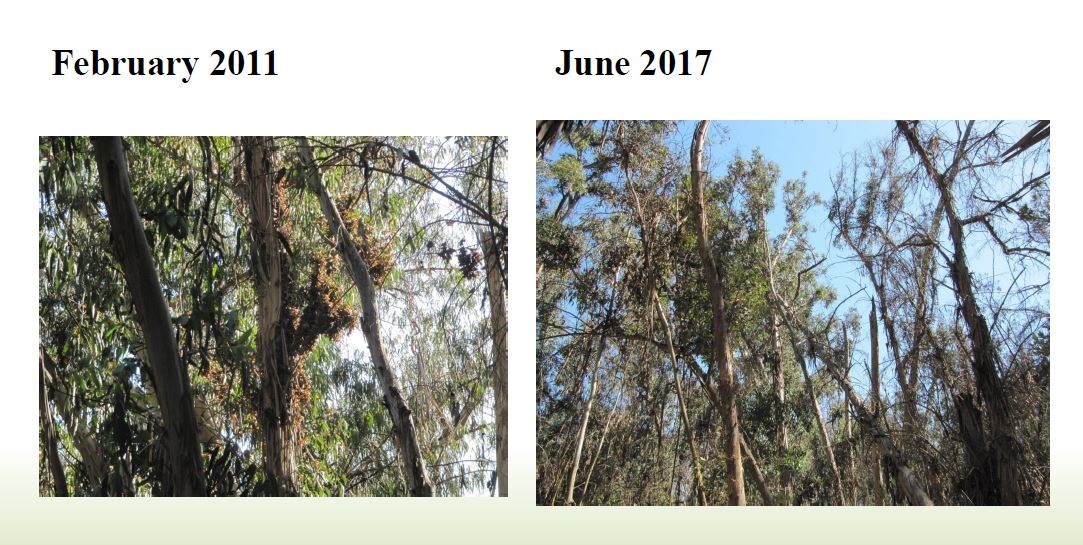 The image at left shows monarch butterfly clusters; at right, the same tree surrounded by toppled, dead trees and the open canopy above insupportable to butterfly colonies.

Monarch butterflies in the Western United States have declined since a record high in 1997 of over 1.2 million counted that Thanksgiving. This year, the count was around 300,000. In Santa Barbara County, which has about 100 monarch butterfly wintering sites, about a third had butterflies, 70,601 recorded in November. Among Ellwood’s five butterfly groves, the numbers ranged from a high of 11,000 in December to a low of 122 in October.

Age is another factor for the ailing eucalypti — blue gum eucs live about 100 years, and many of those at Ellwood were planted as windbreaks for farms in the late 1800s, city planning manager Anne Wells told the Goleta City Council on Tuesday while explaining city staff’s plans to tackle the problem, which is large. 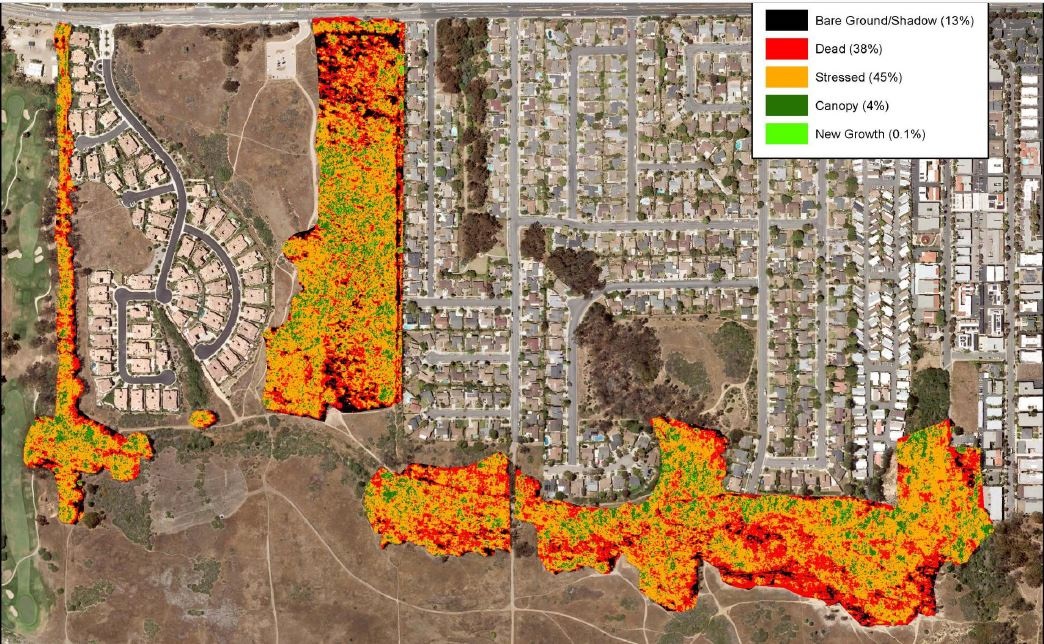 Among the various groves at Ellwood, there are 5,000 trees or more, said Dan Meade of consultants Althouse and Meade. In total, 833 need attention. Of those, 511 are dead. The rest are so stressed that they are pest-ridden and sickly — an “extraordinary” loss, he commented. The condition is common throughout Southern California, where anecdotally about 25 percent of eucs have died or are dying. Similarly the Sierra forests have something like 103 million damaged trees from temperatures that increased 2 degrees Fahrenheit over the past century, said Meade.

The discussion at City Council ranged from the irony of a nonnative, planted grove — which has outcompeted native trees — being an Environmentally Sensitive Habitat Area (or ESHA in tree-hugger lingo) to the blue gum’s ability to saturate the ground with oils and repel rain water, which creates its own drought in the forest.

The butterfly grove may close as early as Thursday, said Valerie Kushnerov, city spokesperson, depending on when they get the signs located. A public discussion of the Ellwood groves situation takes place Wednesday, July 26, 5:30 p.m., at City Hall, 130 Cremona Drive. More information is available here.﻿